To share your memory on the wall of Albert Robinson, sign in using one of the following options:

Albert married the love of his life, his “Buttercup”, Elizabeth Barber on July 7, 1959 at St. Mary’s Church in Massena. He was employed as a security guard at General Motors until his retirement in 1985 and then for Alcoa until 1994. He and his wife Betty owned and operated Robinson’s Green House on Woodlawn Avenue for 10 years.

He was a talented carpenter, and built his family camp at Fraser’s Point, Canada in 1960, where so many wonderful memories were made. He loved spending time with his family and friends on the St. Lawrence River from late spring to mid fall every year. He had a tremendous love for the outdoors and particularly boating and fishing. He had the patience of a saint when fishing with his children and grandchildren, by untangling fishing lines from the moment everyone put a pole in the water. In spite of this, he always had a smile on his face and managed to catch the
most fish out of everyone in the boat.

Albert and Betty enjoyed attending weekly Friday evening gatherings with special friends the last several years. He especially appreciated the many rides and assistance provided by Ray Brais and Bruce Bombard after he lost his sight.

Albert was always willing to help anyone who needed it. He was a communicant of St. Mary’s Church in Massena, volunteering to serve on many different committees and working various parish events. He was a member of St. Lawrence Council #1141 Knights of Columbus in Massena, where he was a Fourth Degree Knight and was awarded “Knight of the Year” in 2001 for his dedication and service to the organization. Albert was an EMT and volunteered with the Massena Rescue Squad. He was also a member of the AMVETS Post #4 and of the Senior Citizens Council.

He is also survived by his brother and sister-in-law, Robert and Joyce Robinson of Malone and many nieces and nephews.

Albert is predeceased by his parents, his brothers, Earl, Floyd, Vern and Leon Robinson; his sisters, IdaMae Fleury, Evelyn Raymond and Orphia Zawadski and his son in law, Sandy Spadafore.

A pillar of strength for his wife, children and grandchildren, he was deeply loved and respected and will be greatly missed by us all.

Due to Covid, services will be announced and held at a later date. Burial will take place at Calvary Cemetery, Massena in the spring.

To send flowers to the family or plant a tree in memory of Albert L. Robinson, please visit our Heartfelt Sympathies Store.

We encourage you to share your most beloved memories of Albert here, so that the family and other loved ones can always see it. You can upload cherished photographs, or share your favorite stories, and can even comment on those shared by others.

Posted Feb 25, 2021 at 01:52pm
My deepest sympathies to Mrs. Robinson and family. I wish you all strength and comfort during this difficult time.
Mr. Robinson that I got to know, would always make you feel welcome . When you had a conversation with him, you could tell
how much he enjoyed life and the company of others . He always has a smile on and enjoyed a good chuckle. It was a pleasure having had the opportunity of knowing him. I know he will be missed by all his family and friends.

Posted Feb 09, 2021 at 09:42am
Patrick, Mrs. Robinson, and Family,
I was so saddened to learn of Mr. Robinson's passing. He was a wonderful man. He will be truly missed.
Comment Share
Share via:

Thank you for the kind words Mark, he will be missed

Posted Feb 07, 2021 at 03:29pm
Mary and John and family so sorry for your loss I just heard today through Tony. No words can make anyone feel better about the loss of a parent. Surely the memories and the love he stowed on your mom and your family will be forever in your heart. With love Tony, Valerie and sons.
Comment Share
Share via:
M

Posted Feb 03, 2021 at 07:58pm
Dear Betty, Mariann, Carolyn, Diane, Pat and families, you are all in our thoughts and prayers. Happy memories of all the years at Fraser's Point. May all your wonderful memories bring you comfort and peace.
Mark & Cindy Meldrum
Comment Share
Share via:

Dear Mark and Cindy, Our father always had a great time sitting with your Mom and Dad around the kitchen counter at camp. We missed you when you left. Thank you for reaching out. The Robinson family
JW 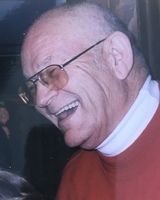