To share your memory on the wall of Betty Pellegrino, sign in using one of the following options:

Betty was born on January 19, 1931 in Saranac Lake, the daughter of the late William and Lillian (Brown) Golden. She attended St. Bernard’s Catholic School through eighth grade and graduated from Saranac Lake High School in 1948. On July 25, 1953, she married Frank J. Pellegrino. Frank predeceased her on September 21, 2020.

Betty first worked for a time at Alcoa before the construction of the Seaway started in 1955. At that time she accepted a secretarial position with UHL, Hall and Rich, a civil engineering firm responsible for the design of the St. Lawrence Seaway and Power Project, she continued with them until 1961. In the mid 60’s she worked for St. Mary’s Church, where she was involved in CCD planning and also worked for Trinity Catholic School. She was a longtime communicant of St. Mary’s Catholic Church, where she served as a Eucharistic Minister for many years. Additionally, Betty was a member of the American Legion Auxiliary and League of the Sacred Heart where she once served as their President and Treasurer. She enjoyed reading, knitting, and sewing.

Betty is survived by her daughters, Pamela Devine and her husband, Drew of Bloomington, Indiana and JoAnn Pellegrino and her companion, Mike Dishaw of Massena; her grandchildren, Tyler and Matthew Devine, Ryan Smith and his wife, Elysa, Brandon Zembek, Jason Zembek and his companion Lane Perl; and her great grandchildren, Madelyn Hirschey and Oliver and Giada Smith.

In addition to her parents and her husband, Betty was predeceased by a son, Kevin E. Pellegrino in September 1984; her sister, Dorothy Salmon; and her brothers, Claude Golden and William Golden, Jr.

There will be no public calling hours. A Mass of Christian Burial will be celebrated at 1:00 PM on Friday, May 28th at St. Mary’s Catholic Church with Rev. Mark Reilly, celebrating. Burial will follow in Calvary Cemetery, Massena.

In lieu of flowers, those wishing may consider memorial contributions to be made in her memory to Trinity Catholic School Endowment Fund.
Read Less

To send flowers to the family or plant a tree in memory of Betty A. Pellegrino (Golden), please visit our Heartfelt Sympathies Store.

We encourage you to share your most beloved memories of Betty here, so that the family and other loved ones can always see it. You can upload cherished photographs, or share your favorite stories, and can even comment on those shared by others. 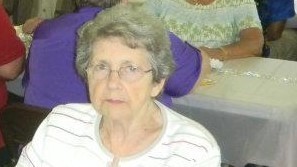