To share your memory on the wall of Rasennes Pembleton, sign in using one of the following options:

Rasennes was a good man. He grew up in his community of Akwesasne, guided by his mother and father, with love and attention of aunties and uncles, and many circles of extended family, where he received and greatly magnified his knowledge of the world. He leaves a legacy of gentle, strong character and personal integrity guided by love and service for his family and his people.

Rasennes was born in Malone, New York on September 2, 1977 to Raymond Pembleton and the late Sakakohe Cook Pembleton. He was a bright student at Mohawk School and Salmon River High School, where he excelled academically and played varsity lacrosse. He played varsity football at St. Lawrence High School. Rasennes graduated from St. Lawrence University in 1999, having earned a Bachelor’s degree in History and Native Studies. Rasennes wed the love of his life, Pamela Lazore, on July 3, 2004, surrounded by close friends and family at their home in Akwesasne. Their joyous union brought two sons, Rakwirahes and Rarontiiostha, whom Rasennes will forever consider his pride and joy. On October 2, 2002 Rasennes and Pamela suffered the loss of their daughter, Kawennanoron Elizabeth.

Professionally, Rasennes served the community as manager of the Saint Regis Mohawk Tribe’s Early Childhood Development program, then as Tribal Court Administrator. He also worked in the private sector as a National Account Manager for Ongweoweh Corp. in Ithaca, N.Y. He then joined MCA’s Aboriginal Rights and Research Office, supporting the reclamation of Mohawk lands. Rasennes believed firmly in the importance of unity within the Akwesasne community.

Rasennes co-founded the Akwesasne Eagles Youth Flag Football organization in 2010. He led many teams through the gates of Generations Field over the past 10 years, and truly loved every moment as a coach, ref, mentor and booster for the Eagles family. Rasennes also coached Akwesasne Storm minor lacrosse for many years.

Rasennes was a lifelong fan of the Philadelphia Eagles, following the team faithfully through their ups and downs. Their 2018 championship lifted his spirits immensely as he followed the exciting playoff run to the “Philly Philly” victory over the Patriots. He was recently surprised with a once-in-a-lifetime virtual experience with quarterback Jalen Hurts and Hall of Famer Brian Dawkins through a special connection with the Jack & Jill Foundation.

He was predeceased by a daughter, Kawennanoron Elizabeth Pembleton on October 2, 2002; his mother, Sakakohe on July 25, 2013; his sister Lisa on December 9, 2020; and by his maternal grandparents Evelyn Montour Cook and Capt. William J. Cook, paternal grandparents Wilma Pembleton and Gladwin Printup; and his uncle, Louie Cook.

Friends may call at the Donaldson Funeral Home on Thursday, June 3 from 3-8 p.m. Funeral services will be held on Friday, June 4 at 10 a.m. A meal will follow at the Pembleton’s home.

Memorial contributions may be made in Rasennes’ name to the Akwesasne Cancer Society.
Read Less

To send flowers to the family or plant a tree in memory of Rasennes Pembleton, please visit our Heartfelt Sympathies Store.

We encourage you to share your most beloved memories of Rasennes here, so that the family and other loved ones can always see it. You can upload cherished photographs, or share your favorite stories, and can even comment on those shared by others.

Karla & Jim Ransom and Family, Brandon Tarbell & Family, and other have sent flowers to the family of Rasennes Pembleton.
Show you care by sending flowers

Posted Jun 07, 2021 at 01:08am
Sincere condolences to Rasenees ‘ family, I met him through his Mom and again through coaching minor lacrosse. A kind and selfless man, may his legacy live on....
Comment Share
Share via:
BS

Posted Jun 04, 2021 at 11:07pm
My prayers for your family during this difficult and painful time. There are no words to truly express the loss of Rasennes. Stay strong.

Posted Jun 04, 2021 at 10:57pm
I met Rasennes in child welfare training more than 20 years ago. We emailed and kept in touch. He was an incredible human being. There are no words I can share or ease this pain. I can say I am truly grateful to have had the opportunity to know such a glorious soul. Rest my friend.
Comment Share
Share via:
KF

Posted Jun 02, 2021 at 07:53pm
Deepest condolences to Rasennes family, he is a kind and gentle soul, our thoughts and prayers are with you all.

Karla & Jim Ransom and Family purchased flowers and planted a memorial tree for the family of Rasennes Pembleton. Send Flowers

Posted Jun 02, 2021 at 03:29pm
Wishing you peace to bring comfort, courage to face the days ahead and loving memories to forever hold in your hearts. 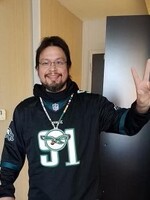