To share your memory on the wall of Gordon Hazel, sign in using one of the following options:

Gordie was born on December 9, 1924 in Massena, son of the late George and Edith (Richards) Hazel. He attended Massena schools and enlisted in the US Navy on September 25, 1943. and proudly served until his honorable discharge on January 16, 1946. He married the love of his life, Marion P. Mousseau on March 26, 1945 at St. Mary’s Chapel. Marion predeceased him on March 10, 2021.

Gordie was a proud Alcoan. After returning from the war, he spent 42 years with the company retiring in 1987. During his time at Alcoa, he was honored in a national news article which described him as a committed member of both the Alcoa team at Massena Operations and the community in which he lives.

In 1994 he was honored to be invited on board the USS George Washington with his grandson sailor, the President and First Lady to commemorate the 50-year anniversary of D-Day.

He was a member of the Earl J. Santimaw Post #1143 VFW, the Gerald R. Roy Post #4 Amvets, and the American Legion Post #79. Gordie was also a member of the Massena Senior Citizens, the Senior Citizens Bowling League, and the Old Timers Hockey League. He enjoyed hunting big game and loved his time in the woods. Coming from a tightly knit family of ten, he loved being with his siblings and spending time with family and friends.

Gordon is survived by his children, Richard and Sherry Hazel and Joanie Hazel, all of Massena; his daughter-in-law Kathleen Wood of Plattsburgh; five grandchildren, Ryan, Matthew, Marc, David and Lynn; and six great grandchildren, Charlie, Lily, Josie, Mollie, Coby and Dylan; and a brother, Thomas and Claire Hazel of Massena.

Friends may call Monday 11-1 PM at the Donaldson Funeral Home, where funeral services will be held at 1:00 PM. Burial will follow at Pine Grove Cemetery II.

In lieu of flowers, donations may be made in Gordie’s memory to the Massena Rescue Squad.

Memories and condolences may be shared online at www.donaldsonfh.com.
Read Less

To send flowers to the family or plant a tree in memory of Gordon J. Hazel Sr., please visit our Heartfelt Sympathies Store.

We encourage you to share your most beloved memories of Gordon here, so that the family and other loved ones can always see it. You can upload cherished photographs, or share your favorite stories, and can even comment on those shared by others.

Posted Jun 14, 2021 at 08:30am
So sorry for our loss. First meet Gordie at Alcoa. First impression was he loved to visit with people. We will miss his smiling face.
My deepest condolences.
Comment Share
Share via:
SC

Posted Jun 12, 2021 at 11:44am
Dear Dick, Sherry and Joanie,
Your mom and dad have held a special place in our hearts for most of our lives. They had a dedicated relationship towards each other and family, that other people who met them, aspired to achieve. We have all been so fortunate to have both Gordon and Marion with us for all these years. Our prayer is that God fills your mind with pleasurable memories that put smiles on your faces to help heal the pain of this loss. It is comforting to think that they are now together again with our Lord. We regret that we are unable to attend the service in person, but please know that we are thinking about you.
Love, Sonny (Ed) and Edith Compo; Virginia Beach, Virginia
Comment Share
Share via:
SC

A donation was made to Massena Volunteer Rescue squad.
CB

Posted Jun 11, 2021 at 07:38pm
Joanie and family-we are very sorry to hear the loss of your father. Sending thoughts and prayers at this time. Gordon will be missed very much. Roger and Cindy Bradford
Comment Share
Share via:
J

Posted Jun 10, 2021 at 02:06pm
Dick, Sherry, and Joanie Our deepest comndolences to all. I have to say I was not surprised to hear of this especially since Marion passed. He and the Love of his Life are together again and doing just fine. Everyone should be blessed to have their kind of life, it really goes by in the blink of your eye. Bless you all as you travel the healing journey til you see them again on the other side. I will always have the fondest memories of Gord and Marion from my childhood, I will miss seeing them. Sincerely, Heather Molnar Goldie
Comment Share
Share via:
CK

Posted Jun 10, 2021 at 08:45am
Dear Sherri, Dick and Joanie
We always had such a good time with your father and mother. Your dad will be missed. He was such a great man. Gerry and Cal Kinney
Comment Share
Share via:
LP

Sorry to hear of Gordon's passing. I was always treated as one of the family. 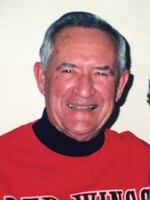