To share your memory on the wall of Irl Hasty, sign in using one of the following options:

Print
OGDENSBURG- With heavy hearts the family of Irl D. Hasty, 62, of Lee Drive Private mourn his tragic death on June 27, 2021 from injuries he sustained in a motorcycle accident.

Irl was born on April 1, 1959 in Syracuse, NY. He attended Bl... Read More
OGDENSBURG- With heavy hearts the family of Irl D. Hasty, 62, of Lee Drive Private mourn his tragic death on June 27, 2021 from injuries he sustained in a motorcycle accident.

Irl was born on April 1, 1959 in Syracuse, NY. He attended Blodgett Elementary School, and later went on to graduate from George Fowler High School. He married Barbara Lazore of Akwesasne, and the couple was blessed with three children and six grandchildren. After ending their marriage, Irl met Cynthia Breyette of Ogdensburg, whom he married and helped raise his two step-sons for 20 years. Though their marriage ended, Irl and Cynthia remained companions, best friends, and roommates until his death.
After graduation, Irl began his career as an ironworker in Syracuse. In his later years, he worked in demolition for ERSI. Irl took great enjoyment in wheeling-n-dealing to make extra money and, at the same time, meet new people. He loved to tinker around the garage and could be found fixing or building something, be it a motorcycle or a broken chair – he was always busy. He liked spending his time outdoors, doing lawn work, fishing, being on the water, riding his motorcycle with friends, or just sitting out back on the riverbank enjoying the river views. Irl will always be remembered for his goofy and larger than life personality, stories told of his ironworking days, stories of him and his children, and his fondness of junk food, especially chocolate and his fetish for ketchup on just about anything.

Irl is survived by his children, Shane (Lisa) Hasty, Tarri (Matt) Hemlock, and Tiffany Hasty, all of Akwesasne; his step-sons, Christopher and Chase Reinhardt; his brother, Randy (Debbi) Hasty of Syracuse; his sisters, Darlene Wilmer of Lake Port, Pam (Horace) Hasty of Alabama, and Tina Hasty of Syracuse; his grandchildren, Tristen, Oakley, Tori, Preston, Alyssa, and Kaya of Akwesasne. He was predeceased by his mother, Yolanda (Mariano) Hasty and his chosen father, Gerard Breyette.

Irl’s family invites to join them as they celebrate his life and share stories on July 10, 2021 from 2-5:00 PM at the Donaldson Funeral Home, Massena.
Read Less

To send flowers to the family or plant a tree in memory of Irl D Hasty Jr., please visit our Heartfelt Sympathies Store.

We encourage you to share your most beloved memories of Irl here, so that the family and other loved ones can always see it. You can upload cherished photographs, or share your favorite stories, and can even comment on those shared by others.

Posted Jul 09, 2021 at 07:41am
May the winds guide you May the water carry you and the earth be with you As your memory is Forever engraved in our hearts. Pam & Horace

Posted Jul 03, 2021 at 02:29am
You will surely be missed my friend. You'll be thought of often as Jon and I sit on the deck overlooking the river. It'll be strange not to hear your voice. As everyone who knows you knows that you had a very loud voice. God bless you my friend.
Forever remembered & loved.

R.I.P. MY BROTHER UNTIL WE MEET AGAIN ON THE OTHER SIDE 🍻✌ 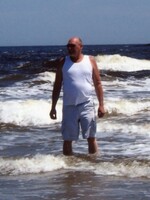