To share your memory on the wall of Delbert Morehouse, sign in using one of the following options:

Print
LOUISVILLE- Delbert R. Morehouse, 92, passed away peacefully with his family by his side on July 3, 2021, an incredibly significant date, as Delbert and his wife, Dorothy, celebrated their
67th wedding anniversary.

Delbert was bor... Read More
LOUISVILLE- Delbert R. Morehouse, 92, passed away peacefully with his family by his side on July 3, 2021, an incredibly significant date, as Delbert and his wife, Dorothy, celebrated their
67th wedding anniversary.

Delbert was born in Massena on July 14, 1928. He graduated from Massena Central High School in 1947. He then served in the US Army during the Korean Conflict for two years and remained proudly patriotic. He was a dedicated, hardworking Alcoa employee for 42 years.

Delbert was an avid golfer. He was also active in his church, St. John’s Episcopal Church, in Massena. His faith was integral to him. One of Delbert’s most endearing qualities was his gift of self, always greeting folks with a handshake and a smile. He was a true humanitarian. Most important to him was his family. Delbert had a true love story with his wife, Dorothy, that began when they met living on the same street growing up.

Delbert is preceded in death by his four brothers, his sister, and his son, Patrick, who passed away three years ago.

He is survived by his beautiful wife, Dorothy; his three children, Craig (Guinevere) Morehouse of California, Lisa J. Bero of New York, and Dr. Michael Morehouse of Pennsylvania; and many grandchildren who loved their “Popop” very much.

As per Delbert’s wishes, there will be no calling hours. The family will have a private memorial service.

Donations can be made to St. John’s Episcopal Church, Massena, and Hospice of St. Lawrence Valley, Potsdam.

Arrangements made under the care and guidance of Donaldson Funeral Home, Massena.
Read Less

To send flowers to the family or plant a tree in memory of Delbert R. Morehouse, please visit our Heartfelt Sympathies Store.

There are no events scheduled. You can still show your support by sending flowers directly to the family, or planting a memorial tree in memory of Delbert R. Morehouse.
Visit the Heartfelt Sympathies Store

We encourage you to share your most beloved memories of Delbert here, so that the family and other loved ones can always see it. You can upload cherished photographs, or share your favorite stories, and can even comment on those shared by others.

Posted Jul 15, 2021 at 06:30pm
My Dad was MY HERO in the TRUEST SENSE. He never ever complained even when he was in tremendous pain he would not complain. You hear this all the time about someone giving you the shirt off there back well that's what he would do no matter what. We use to call each other OLD-TIMER. Well OLD-TIMER your in HEAVEN now with my BROTHER Patrick. RIP MY HERO.
MISS-YOU POPS
LOVE CRAIG
Comment Share
Share via:
HS

Posted Jul 09, 2021 at 01:07pm
Having to say goodbye to a loved one is never easy. Watching something grow will create a lasting memory in their remembrance. We are thinking of you.

Posted Jul 08, 2021 at 05:48pm
We were saddened to hear of Delbert's passing. What a wonderful, funny man who never let an opportunity go by without a witty comment or anecdote. Thoughts and prayers are with you all, that your joyful memories help you through the grief.

Posted Jul 07, 2021 at 06:48pm
Delbert was a great man that always took time to not only say hello but share a story . We had a standing joke going about golfing a number a years ago . His son Patrick and i were long time friends and right from day one Delbert was always there . His entire family really were all so great ! I am so sorry to hear this news , i'm sure he will be looking down on golf courses , gyms , arena's and all the venues and places that friends and family meet .
Comment Share
Share via:
DR 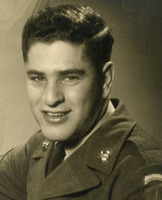