To share your memory on the wall of Earl Pitts, sign in using one of the following options:

Earl was born on September 16, 1939 in Brasher Falls, the son of the late Harold W. and Berni... Read More
MASSENA – Earl F. Pitts, 81, of Wilson Ave, passed away peacefully early Tuesday morning, July 6, 2021 at his home after a lengthy illness.

Earl was born on September 16, 1939 in Brasher Falls, the son of the late Harold W. and Bernice (McGregor) Pitts. Earl was a hard worker who owned and operated Stewart Brothers Janitorial Services for many years. He greatly enjoyed mowing lawns and doing property maintenance for his customers. He also was an avid Boston Red Sox fan and following NASCAR.

Earl is survived by his son and daughter-in-law, Jeffrey and Candy Black of Central Square; his granddaughters, Chantel, Ashley, and Amber; his companion of 21 years, Cindy Hill; her daughter, Jessica Hill and her children, Nevaeh, Ryleigh, Ava, and Madelyn; several great grandchildren; and many nieces and nephews.

In addition to his parents, he was predeceased by his longtime companion, Marjorie Black; a stepson, Michael Black; his sister, Flossie O’Connell Spink; her brothers, Milton, Victor, Benjamin, Fletcher, Harold, and Bernard Pitts.

At his request there will be no services. A celebration of life will be held privately with burial in Calvary Cemetery, Massena.

In lieu of flowers those wishing may consider memorial contributions to Hospice and Palliative Care of St. Lawrence Valley or American Lung Association.
Read Less

To send flowers to the family or plant a tree in memory of Earl F. Pitts, please visit our Heartfelt Sympathies Store.

There are no events scheduled. You can still show your support by sending flowers directly to the family, or planting a memorial tree in memory of Earl F. Pitts.
Visit the Heartfelt Sympathies Store

We encourage you to share your most beloved memories of Earl here, so that the family and other loved ones can always see it. You can upload cherished photographs, or share your favorite stories, and can even comment on those shared by others.

Posted Jul 14, 2021 at 05:37pm
We would like to send our most heartfelt thoughts and condolences to his family'. 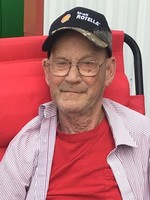