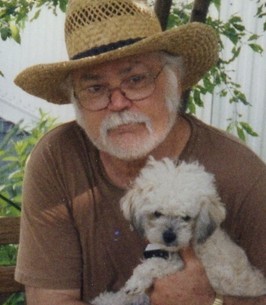 Chuck was born on November 30, 1944 in Potsdam, the son of the late Neil and Doris (Nicols) Cyrus. He was a graduate of St. Lawrence Central School. Following graduation, he entered the United States Air Force. He proudly served his country in the Air Force for 12 years, followed by 8 years in the US Army Reserves.

Chuck was a very talented small engine and appliance repairman, working for a time with Montgomery Ward and Sears. He also worked for a time with Carl King and Aeon Heating and Plumbing doing furnace and air conditioning repair. He was a member of the Parishville AMVETS Post #265 and the Winthrop American Legion. Throughout his life, Chuck had a great love for the outdoors with hunting, fishing, and camping being some of his favorite pastimes. He shared this passion with his children and grandchildren and was proud to see them “shoot their first buck or catch their first fish.”

Chuck is survived by his loving companion of 43 years, Renate McCanns and their beloved dog Lightning; his daughter, Chauntele Wagner of Alpena, Michigan; his companion’s daughters, Yvonne and Mahmoud El Danat of Germany; Chrissy and Dude Cool and Michelle and Charles Grant, all of Parishville; his grandchildren, Katlyn Helinski, Mariah Wagner, Brian and Jennean King, Donnie King, Tony and Ciera Jandreau, Christopher Jandreau, Matthew and Shelby Grant, Salah, Talal, and Essam El Danat; and 4 great grandchildren, Carmelle, Aniyah, Cooper, and Emica; his sister, Linda LaMora of Waddington; and many nieces, nephews, and cousins.

In addition to his parents, he was predeceased by his brothers, Wayne, James, Neil Jr., Mike “Murl”, William, Richard, Lee, Ronald, and Leon Cyrus and his sister, Margaret Smith.

A celebration of Chuck’s life will be held on Monday, June 27, 2022 at the Parishville Fireman’s Hall, Rutman Road, from 5-8:00 PM with a prayer service with military honors being held at 7:00 PM.

In lieu of flowers, those wishing may kindly consider memorial contributions to be made in his memory to the Parishville Volunteer Fire Department, Hospice of St. Lawrence Valley, or Potsdam Humane Society.